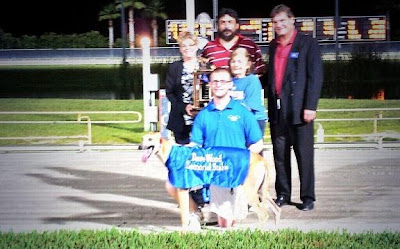 Caught A Whale broke to the lead and never looked back, going box to wire Saturday night at Daytona Beach Kennel Club, capturing the third annual $10,000 Dave Wood Memorial Stakes in a blistering time of 30.04. The time was just .04 seconds off the track record set by La’s Batman (Get Over-Ruby is Best) who was honored by the track in May.

Race fans lined the rail in anticipation of the race, named after DBKC long time racing secretary Dave Wood who died in 2010, Caught A Whale 21-9-2-2 did not disappoint, breaking out of the seven box and leaving #8 GS Butterfly 47-12-15-4 (Afleet Alex-Ask Sherry) in his wake, romped to a six and a half length victory for Soul Runner Racing Kennel and trainer Shirley Eckard. As he crossed the finish line, the crowd was abuzz in hopes of a track record time. Caught A Whale joins 2011 winner Gilded Sherry (Lonesome Cry - Gilded Memory*) and 2012 winner Kiowa JK Penske (Flying Penske - Kiowa Fancy Girl) as Dave Wood Memorial Champion.

The 1-1 favorite #6 Atascocita Dalie ( Atascocita Leroy- Atascocita Susie) got caught in traffic early and was never a factor finishing sixth.

Posted by GreyhoundNews at 12:58 PM